This is an HTML Document rendered as filed.  [ Alternative Formats ]

100 NE Adams Street
Peoria, Illinois 61629
May 2, 2015
Dear Fellow Stockholder:
I am pleased to invite you to attend Caterpillar’s annual meeting of stockholders on June 10, 2015. The meeting will be held at The Columbian Theatre, 521 Lincoln Avenue, Wamego, KS 66547 beginning at 8:00 a.m. We hope that you will attend the meeting, but whether or not you are planning to attend, we encourage you to vote your shares.
This booklet includes a formal notice of the meeting and the proxy statement which, among other things, provides information on Caterpillar’s corporate governance, executive compensation programs and the matters to be voted on at the meeting. The booklet also contains information about our business and 2014 financial performance. I encourage you to review the financial information contained in Appendix A.
If you wish to attend the meeting, you will need to request an admission ticket in advance. Procedures for requesting an admission ticket are described on page 52.
I thank you for your commitment to Caterpillar and urge you to vote your shares.

100 NE Adams Street
Peoria, Illinois 61629
Notice of Annual Meeting of Stockholders
of Caterpillar Inc.
Date: June 10, 2015
Time: 8:00 a.m.
Place: The Columbian Theatre, 521 Lincoln Avenue, Wamego, KS 66547
The items of business are:
We initiated delivery of the proxy materials to stockholders on or about May 2, 2015. Stockholders at the close of business on April 13, 2015 will be entitled to notice of and to vote at the annual meeting and any adjournment or postponement. A list of registered stockholders is available at the Company’s headquarters in Peoria, Illinois.
If you wish to attend the meeting, you will need to request an admission ticket in advance. Procedures for requesting an admission ticket are described on page 52.
Important Notice Regarding the Availability of Proxy Materials for the Annual Meeting of Stockholders to be held on June 10, 2015: This Notice of Annual Meeting and Proxy Statement and the 2014 General and Financial Information are available at www.eproxyaccess.com/cat2015. 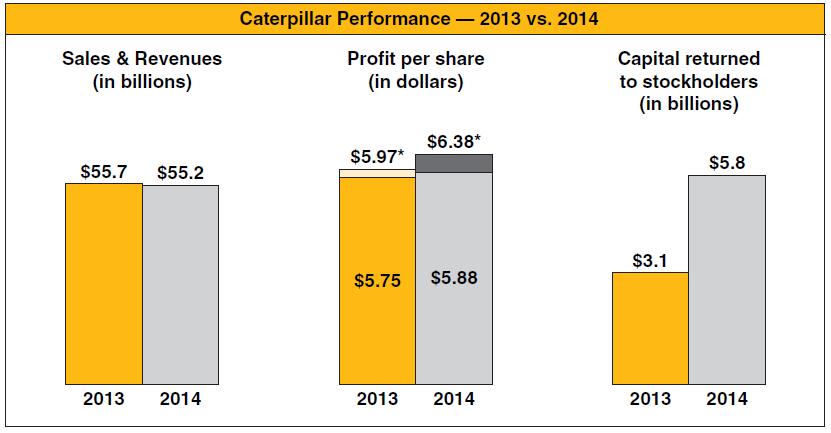 *Excluding restructuring costs. A reconciliation of our non-GAAP results to our most closely comparable GAAP results are included under the caption “NON-GAAP FINANCIAL MEASURES” on page A-140 of Exhibit 13 to the Company’s Form 10-K for the fiscal year ended December 31, 2014, filed with the SEC on February 17, 2015.
Financial Highlights:
Stockholder Highlights:
Operational Highlights:
Compensation Philosophy and Objectives
The objective of the Company’s executive compensation program is to attract, retain and motivate talented executive officers who will improve the Company’s performance and provide strategic leadership. Additionally, the Compensation and Human Resources Committee of the Board of Directors (the Committee) designs compensation programs to align the actions of our Named Executive Officers (NEOs) with the long-term interests of our stockholders based on two fundamental concepts: Pay for Performance and Pay at Risk.
Pay for Performance: 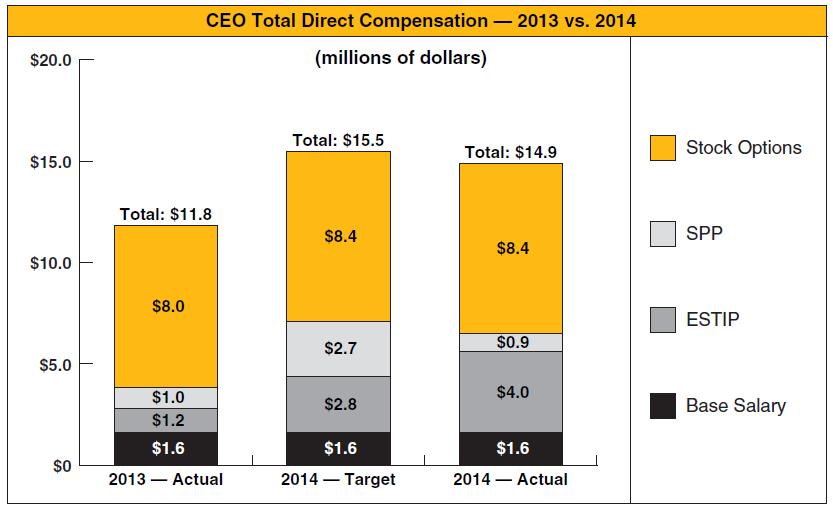 Pay at Risk:
As illustrated below, for NEOs in position throughout 2014, on average approximately 85 percent of compensation was variable or “at risk” and tied to Caterpillar’s performance:

(table continued on next page)
Except for customary provisions in employee compensation plans and as required by law, there are no pre-existing severance or change in control agreements with the NEOs.
The following is a summary of the compensation that would become payable under the existing compensation plans if an NEO’s employment had terminated on December 31, 2014 in each of the following scenarios:
Deferred Compensation
The “2014 Nonqualified Deferred Compensation” table on page 34 describes unfunded, non-qualified deferred compensation plans that permit the deferral of salary, bonus and short-term cash performance awards by NEOs. These plans also provide for matching contributions by the Company. NEOs are eligible to receive the amount in their deferred compensation accounts following termination under any termination scenario unless the NEO elected to further defer the payment as permitted by the plans.
Post -Termination Benefits
Other than in accordance with the terms of existing compensation and benefit programs, and as described below with respect to Mr. Levenick’s retirement from the company effective February 1, 2015, the Company is not obligated to provide any special severance payments to any NEOs.
In connection with Mr. Levenick’s retirement from the company, the Committee granted Mr. Levenick stock options on January 5, 2015 with a grant date fair market value of $4.0 million. The Committee also approved the accelerated vesting of 1,583 outstanding RSUs previously granted to Mr. Levenick under the Chairman’s Award Program. In providing this approval, the Committee considered Mr. Levenick’s 37 years of service with the Company, including his leadership in strengthening the relationship between Caterpillar and the independent global dealer network through the “Across the Table” dealer transformation. His strategic leadership has been viewed as instrumental in strengthening the alignment between Caterpillar and the independent dealers.
Terms & Potential Payments - Change in Control
The following tabular information quantifies certain payments that would become payable under existing plans and arrangements if the NEO’s employment had terminated on December 31, 2014. The information is provided relative to the NEO’s compensation and service levels as of the date specified. If applicable, they are based on the Company’s closing stock price on December 31, 2014.
Compensation for non-employee directors for 2014 was comprised of the following components:
Target ownership guidelines require directors to own Caterpillar common stock in the amount of two and one half times their annual compensation. Directors have a five-year period from the date of their election or appointment to meet the target ownership guidelines. All Directors subject to the ownership guidelines are in compliance with their target.
Under Caterpillar’s Directors’ Deferred Compensation Plan (DDCP), directors may defer 50 percent or more of their annual retainer and stipend in an interest-bearing account or an account representing equivalent shares of Caterpillar stock.
In accordance with Caterpillar’s Long-Term Service Separation Policy, unvested equity awards will vest upon the separation of Board service (to the extent that Board service has continued for at least six months immediately following the grant date) for any Director that has served on the Board of Directors of the Company for five or more years and is age 55 or older at the time of separation.
Directors appointed or elected to the Board of Directors prior to April 1, 2008, also participate in a Charitable Award Program. Under the program, a donation of up to $1.0 million will be made by the Company, in the director’s name, in ten equal annual installments, with the first installment to be made as soon as practicable after the director’s death. Of the total donation, half will be donated to the eligible tax-exempt organization(s) selected by the director, and the remainder will be directed to the Caterpillar Foundation. The maximum amount payable is $1.0 million on behalf of each eligible director. The sum is based on the director’s length of service. The program is financed through the purchase of life insurance policies. Directors derive no financial benefit from the program. Premium payments and administrative fees paid by the Company for this program are included in the “All Other Compensation” column for Mr. Dickinson, Mr. Gallardo, Mr. Magowan, Mr. Osborn and Mr. Rust who participate in this program.
The Compensation and Human Resources Committee regularly reviews the Company’s compensation policies and practices, including the risks created by the Company’s compensation plans. In addition, the Company also conducted a review of its compensation plans and related risks to the Company. The Company reviewed its analysis with the Committee and the Committee’s independent compensation consultant, and the Committee concluded that the compensation plans reflected the appropriate compensation goals and philosophy. Based on this review and analysis, the Company has concluded that any risks arising from the Company’s compensation policies and practices are not reasonably likely to have a material adverse effect on the Company.
The Board has nominated the following individuals to stand for election for a one-year term expiring at the annual meeting of stockholders in 2016.
Director and Director Candidate Biographies and Qualifications
Directors have been in their current positions for the past five years unless otherwise noted.